“National is reaffirming its commitment to the people of Tauranga to complete a four-lane Takitimu Northern Link all the way to Omokoroa,” Mr Brown says.

“This project was approved, funded and ready to go in 2017 thanks to National, but instead of getting on with it, Labour put the people of Tauranga through the wringer by cancelling, restarting, delaying and paring back the project.

“National will get Tauranga moving and I know that Sam Uffindell will fight hard to secure more projects to unlock this city’s potential.” 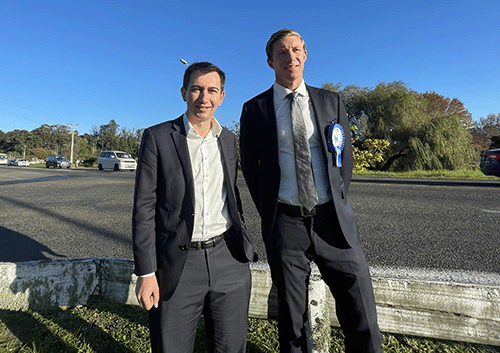 Stage one of the project was approved and funded under the previous National Government, before it was cancelled by Labour. Strong pressure from local National MPs led the Government to reinstate plans to complete the project, including stage two to Omokoroa. After the 2020 election, Labour scaled back the project to only stage one and delayed stage two for at least a decade.

National will complete both stages of the Takitimu Northern Link, with stage two of the project, estimated by NZTA to cost $545 million, to get underway after the next general election. National will also make all four lanes available to general traffic, instead of just two as is currently planned.

“When I’m out talking to people in Tauranga and visiting businesses, one of the biggest issues I hear about is how sick and tired everyone is of sitting on clogged roads getting to work or family commitments,” says Mr Uffindell.

“I’m thrilled to be able to reaffirm National’s commitment to completing the Takitimu Northern Link and show the people of Tauranga that I will work tirelessly to address issues like the congestion choking our city.

“The status quo is unsafe, unproductive and a drag on our region’s quality of life. Tauranga has worse congestion than Washington D.C. or Johannesburg and we’re losing 52 hours every year to congestion – time we’d rather be spending doing things we enjoy.

“After five years of uncertainty over the future of the Takitimu Northern Link, what you can be certain of is that National will build it and get Tauranga moving.”